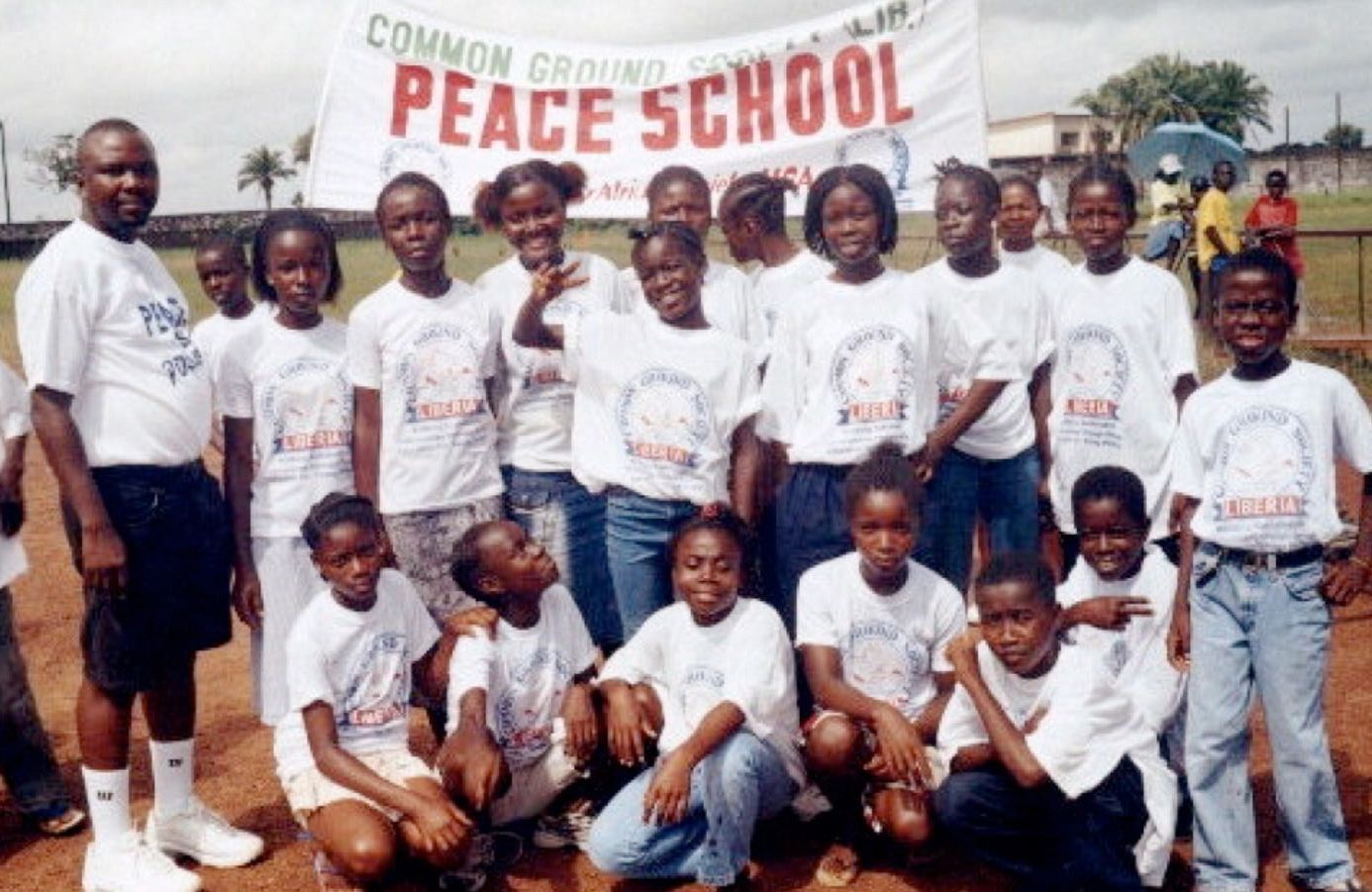 Liberating the Children of Liberia - and the World

One courageous teacher and twenty children of war are changing the world - one lesson at a time. 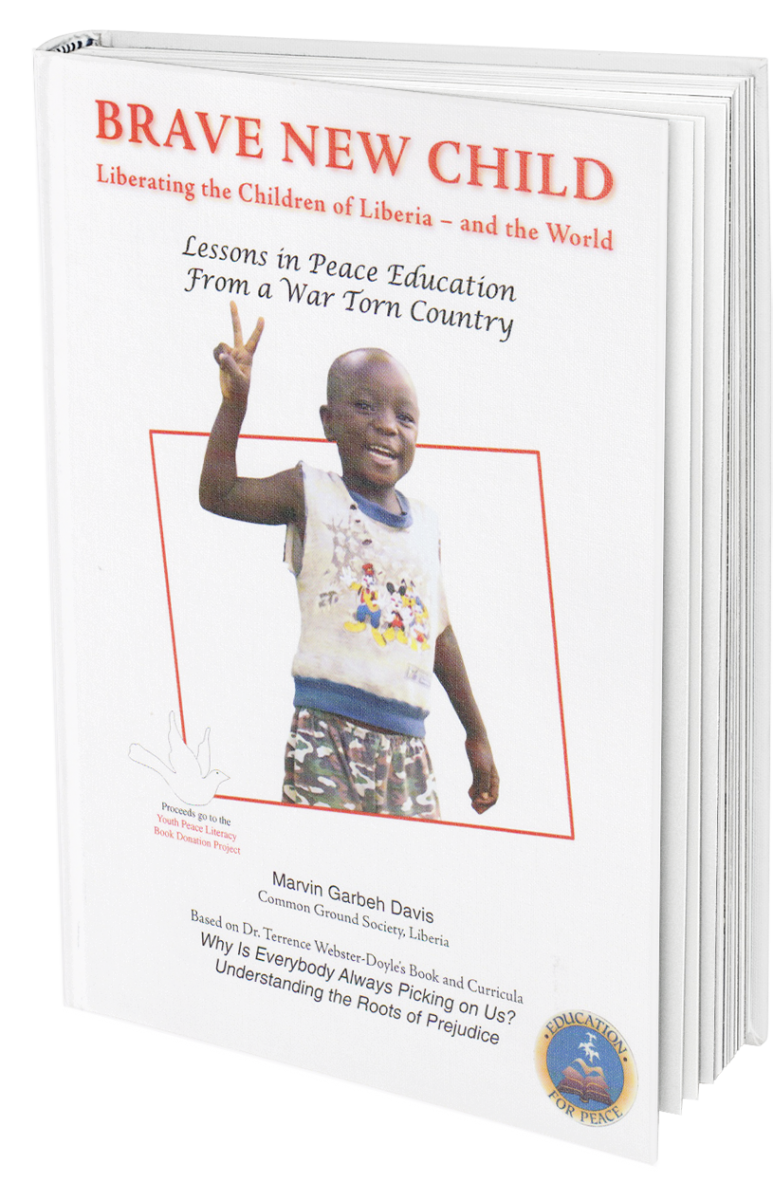 "Out of one of the most violent civil wars in recent history comes the inspiring and courageous story about twenty children of war and their dedicated teacher at their peace school in Buchanan, Liberia. These children were raised in war; they know nothing else. Their teacher, Marvin Davis, having had to flee Liberia because his life was in danger came back to teach the children of this war torn country about what caused the war they just had gone through. Searching the Internet for peace educating organizations that would help him he found the Atrium Society USA. Out of this search he began a friendship with the distinguished child peace educators Terrence and Jean Webster-Doyle. Working together as a team the three of them helped establish the Common Ground Society Peace School of Liberia. They then decided that Marvin should teach the children the Atrium curricula Why Is Everybody Always Picking On Us - Understanding the Roots of Prejudice to see if this program could have any effect on the conditioned views of these children who knew nothing but war. When you read these 20 Lessons Marvin Davis has sent back to the Webster-Doyles in the form of letters you will see what can happen if young people are taught to understand conditioned, prejudicial thinking that has time and time again lead us into war. These Lessons demonstrate that no matter how conditioned one is to violent behavior, and these children of Liberia are perhaps the most severe cases one can imagine, that they can be liberated from that habitual mindset. And if they can, so can all children who face conflict daily - from bullying on the playground to bullying on the battlefield."

All the profits from the sales of this book go to the Youth Peace Literacy Book Donation Project to help people like Marvin Davis of the Common Ground Society in Liberia.

Learn About the Liberian Project

Through working with Liberian children of war it was discovered that the source of human conflict underlying the divisive nature of conditioned thinking that creates self-protective, segregated ethnocentric ideologies emanates from the biological primitive brain. In other words, the prejudicial preservation instinct to protect ones own ethnic group and to defend against those who present a threat to its security is genetically hardwired in the lower brain for survival.

These findings came about over an eight-year period through the Atrium Society’s Liberian Peace Education Project into the causes of its 15 year-civil war for and the effect this had on former Liberian youth combatants. It revealed at first that these young combatants had been psychologically conditioned to fight people they were told were their enemies because of years of political and economic propaganda. But later as the project progressed it was then discovered that there was a far deeper biologically primitive impulse inbuilt into their brains that was the root cause of conflict, indicating that the biological brain was the source.

It was this primal instinct for survival that consequently created the divisive cultural ideological prejudicial conditioning. Thus recognizing this as such, it was important to create resources and training programs that addressed both the primitive biological and psychological brain to get to the root cause and the symptom simultaneously. This significant perception has been integrated into the programs of the Atrium Society since it’s intent is to prevent prejudicial conflict from happening at the source – from the "playground to the battlefield."

From this initial discovery with Liberian children of war it was then ascertained from further investigation that in general this biological instinctual drive has understandably been rooted for eons in the primitive human brain of all human beings being hardwired for war as a genetically programmed survival instinct – that "combat is in our DNA and demands to be exercised". But it is erroneous for it is programmed to only insure survival for the individual segregated ethnocentric group and hence it is therefore preventing survival for the whole within which the individual group is an integral apart of and thus it is destructive for all. It was determined then that the extreme outcome of this genetically erroneous hardwired compulsion for racial self-protection, due to the genetically driven divisively destructive nature of ethnocentric superiority, could be called "genetic genocide."

It is the desire of the Atrium Society, that by bringing to light this insight into our deeper nature, that we can be free of this destructive erroneous biological instinct, thus allowing us to act from a more conscious way of living.

The Importance of Empirical Observation

“We could say that practically all the problems of the human race are due to the fact that thought is not proprioceptive. Thought is constantly creating problems and then trying to solve them. But as it tries to solve them, it makes it worse because it doesn’t notice that it’s creating them, and the more it thinks, the more problems it creates – because it’s not proprioceptive of what it’s doing.”
- Dr. David Bohm – Thought as a Structure

Our work with the Liberian children of war that brought about such wonderfully positive results was due to what is called Empirical observation. Empirical observation is derived from direct observation rather than theory. Or in other words it is first-hand, from the original source directly. Quantum Physicist Dr. David Bohm calls this “proprioceptive learning.”

We were moved to see that the children of war in Liberia we worked became observant of their conditioned reactions because of the curriculum we taught them.  This produced awareness for them to see this conditioning that created conflict in the moment, for it is only in the moment that one can see and end conflict. It is what the Centre of Infant Cognition at the University of British Columbia did to come up with the results that children are “born bullies or “social stratification” as they call it. It is this first hand, Empirical or proprioceptive learning that is the key factor in ending conflict has it happens in the moment, the only time when it can end.

What we did was governed by, or acquired through first hand experience rather than theory, speculation, or ideals. It was pragmatic, founded on experience advocating behavior that is dictated more by practical consequences than by theory or dogma. It was not based on debate or intellectual supposition or guesswork.  It was looking at what is without judgment or criticism.

Why Is Everybody Always Picking On Us?
Understanding the Roots of Prejudice

The book Brave New Child – Liberating the Children of the World is based on Why Is Everybody Always Picking On Us? Understanding the Roots of Prejudice, which you can find below. 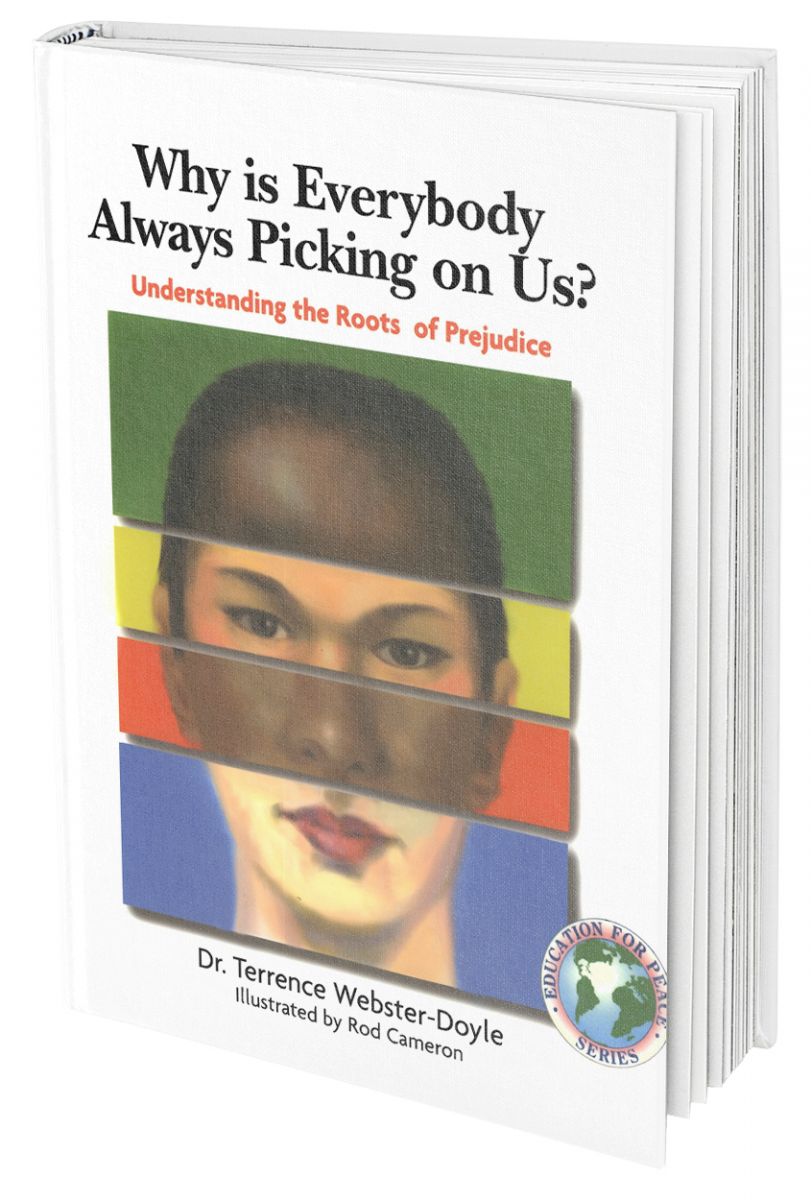