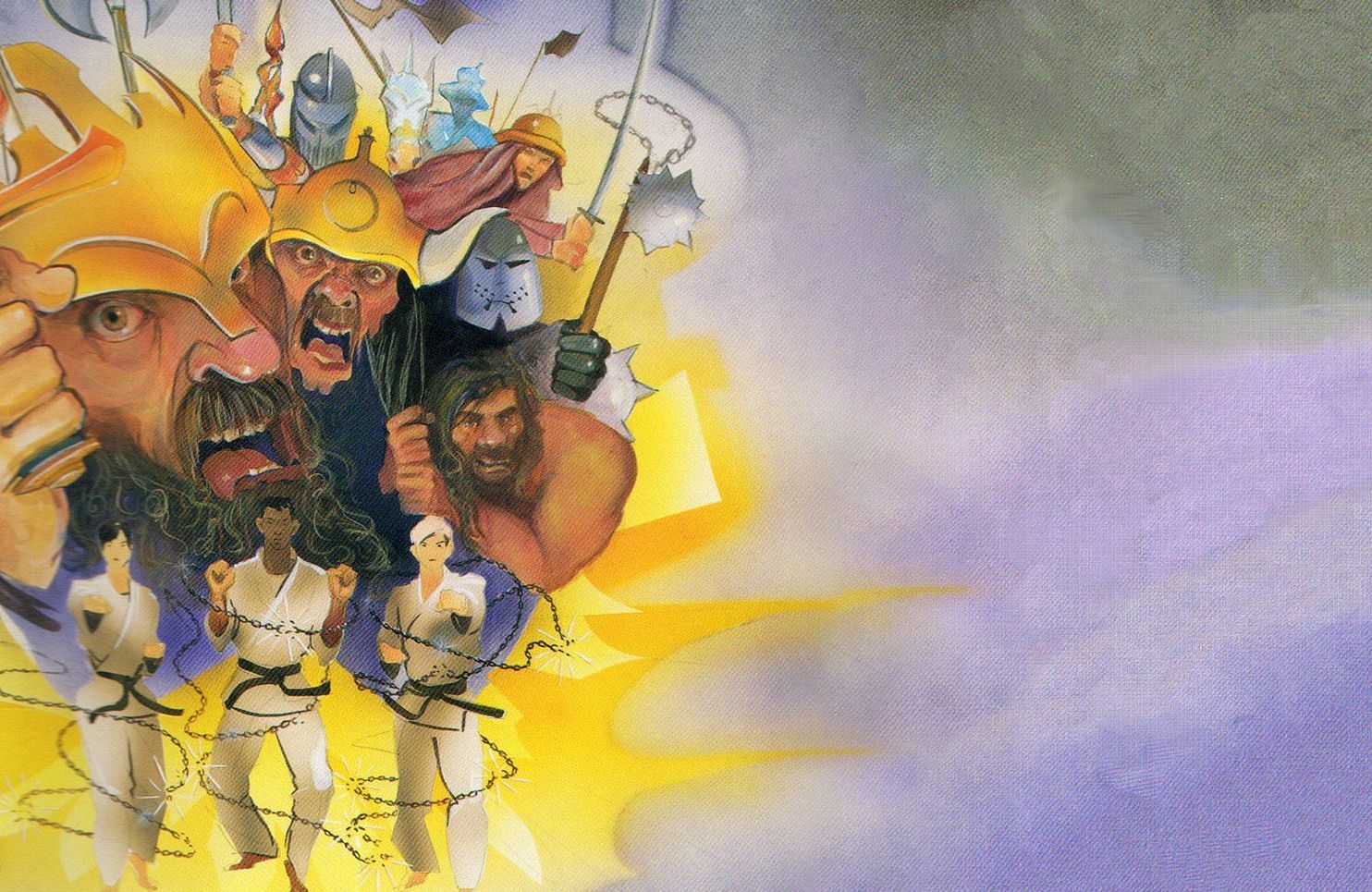 BREAKING THE CHAINS OF THE ANCIENT WARRIORS

Imagine that you are at an International Martial Arts Peace Camp...

"Let me tell you a story of the shadow," the teacher said, stroking his white beard. The students sat upright in the old practice hall. The creaking of the trees in the night wind with the crackling fire somehow made the room both eerie and cozy. Shadows of the students played on the wall, enlivened by the fire in the large, stone fireplace. A screech owl cried, sending shivers down the back of each student. The teacher leaned forward, his bright eyes ablaze, a neatly frayed Martial Arts Uniform cloaking his massive body.

Do you understand the meaning of the shadow?

"Let me tell you its tale. There was a man so disturbed by his own shadow and so displeased with his own footprints he made up his mind to get rid of them both. The method he came up with was to run away from them. So he got up and ran. But every time he put his foot down, there was another print. And his shadow kept up with him without the slightest difficulty. He thought perhaps he was not running fast enough. So he ran faster and faster, without stopping, until he finally dropped dead. He failed to realize that if he merely stepped into the shade, his shadow would vanish. And if he stopped moving and sat down, there would be no more footsteps."

"Students," the white-bearded Teacher went on, "each of us has a shadow, and we all leave footprints in time. We are inheritors from our ancestors. Human beings have been violent creatures for thousands of years, fighting each other in endless wars. We have inherited this violence from our warrior past; we are the children of the Ancient Warrior. We are still violent, war-like creatures who fear the dark side. Violence stalks us like our shadows; it is inseparable from us. We only pretend we have gone beyond our primitive past. But, like our shadow and our own footprints, we cannot run away from the violence, which is part of who we are." 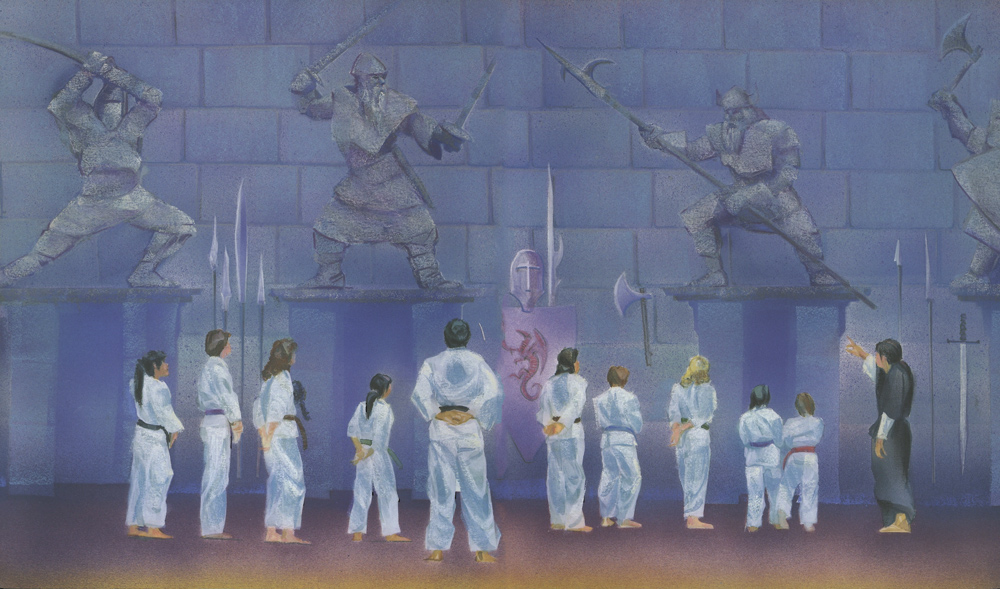 "Dear students, the most important intent of the Martial Arts is to free us from this warrior shadow, break the chains of the past, and allow us to emerge as new human beings who have understood this immense problem and gone beyond it."

The flames of the fire played softly and silently on the figures in that large, old room. The polished wooden floor beneath them was hard and well worn from years of practice.

"Our challenge as Martial Artists is to become new 'warriors,' Martial Artists for peace, Martial Artists with courage and understanding, seekers of truth. Most people see the Martial Arts as training in violence. Unfortunately, Martial Arts have too often been promoted and practiced solely as a means of physical self-defense—and not as a complete endeavor, incorporating the physical, mental, and spiritual." 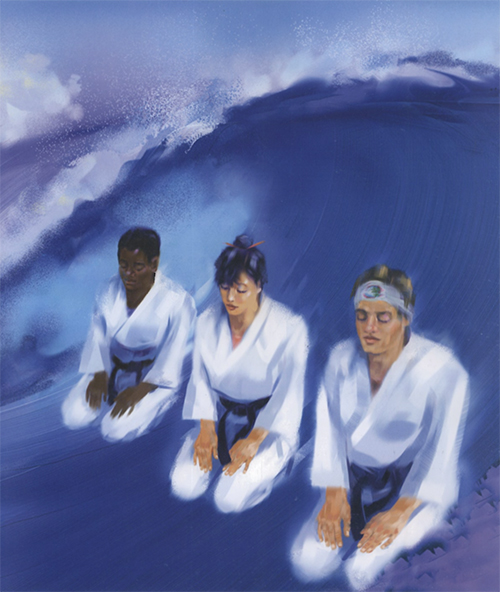 "Your challenge here is to explore and uncover what this shadow is, how the Ancient Warrior in us can be met and understood, and to become free of these chains from the past which hold us in bondage, keep us in darkness, conflict, fear, and violence. Together we will explore this Ancient Warrior shadow in each of us, for to understand and go beyond conflict, the inheritance of our warrior past, is the ultimate purpose of studying the Martial Arts. Through this study, we examine the 'martial' in ourselves, our attitude that through war we can bring about peace, a destructive attitude which has been passed from generation to generation, carrying with it tremendous suffering and sorrow. Can you see the importance of why we study the Martial Arts? Oh, dear students, begin to see this and you will begin to break the chains of the past and become free to live healthier, happier lives."

The students listened intently to their Master Teacher, for they realized he was speaking of something very important. They had come to this school from all over the world, sent by their Teachers to study with Master Teachers who know and teach the real meaning of the Martial Arts. They had all been carefully selected to spend this time together. Many had applied, but only the serious were eligible. This was a great privilege, not to be taken for granted. 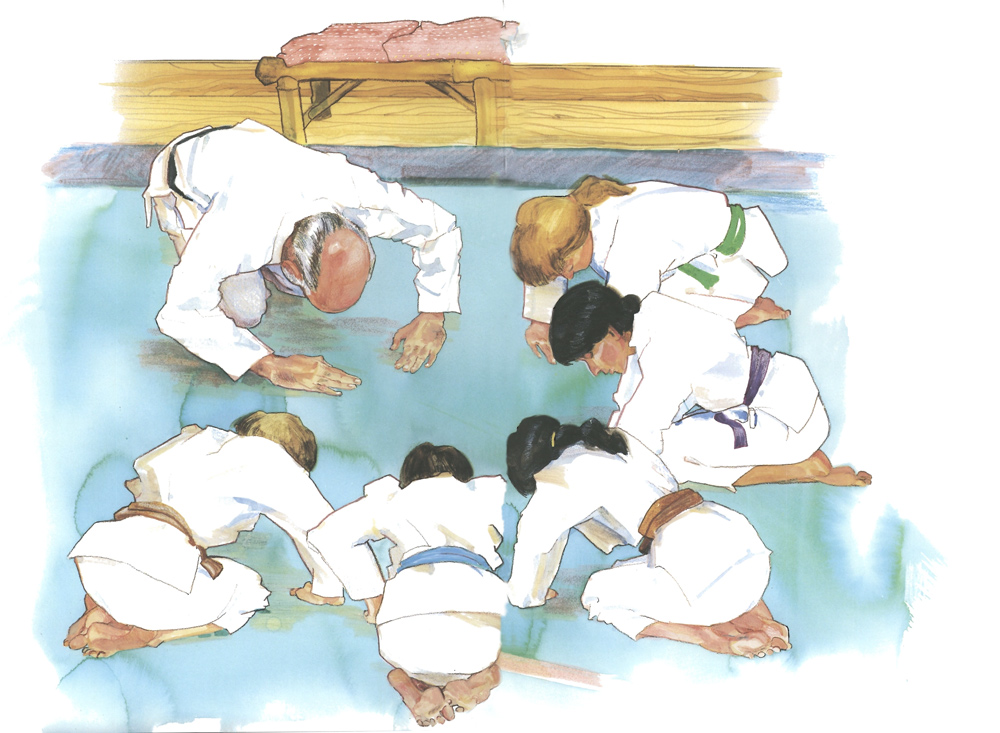 "You have been specially chosen to be here at the International Martial Arts for Peace Camp," the Master Teacher said forcefully. "Make good use of this time. We will be putting you through a series of challenging character developing tests you will need to meet and 'defeat' the Ancient Warrior. If you pass the tests before you, you will return to your schools worldwide, able to teach others about the Ancient Warrior—that which creates such tremendous violence and war. You will be ambassadors of peace, Martial Arts Educators for peace dedicated to understanding what creates conflict in human relationships and what it means to free oneself from the past. This is a serious undertaking students. One that is very real. We are not playing games here! From this moment on, you will be constantly tested to see if you can meet the challenge. This is a trial of your strength and intelligence. It will be hard both physically and mentally. Remember, the most important weapon you have is not your fist nor your feet, but your brain—for to understand and defeat the Ancient Warrior, you will need to be very alert, aware, focused."

The moon shone through the window, softly pouring its light across the floor. The wind ceased and the fire grew dim. 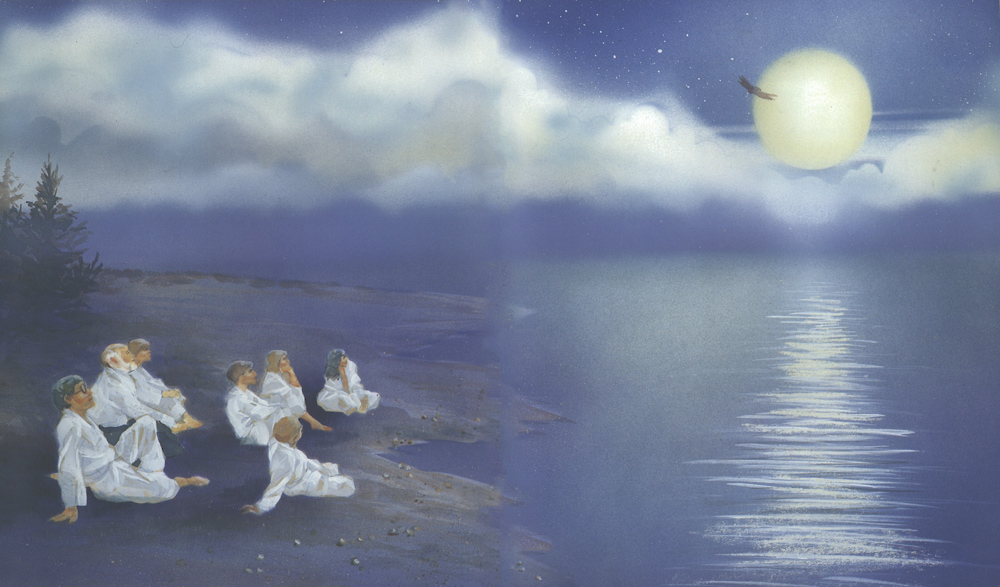 "Now let’s look at who the Ancient Warrior is and how it was created." 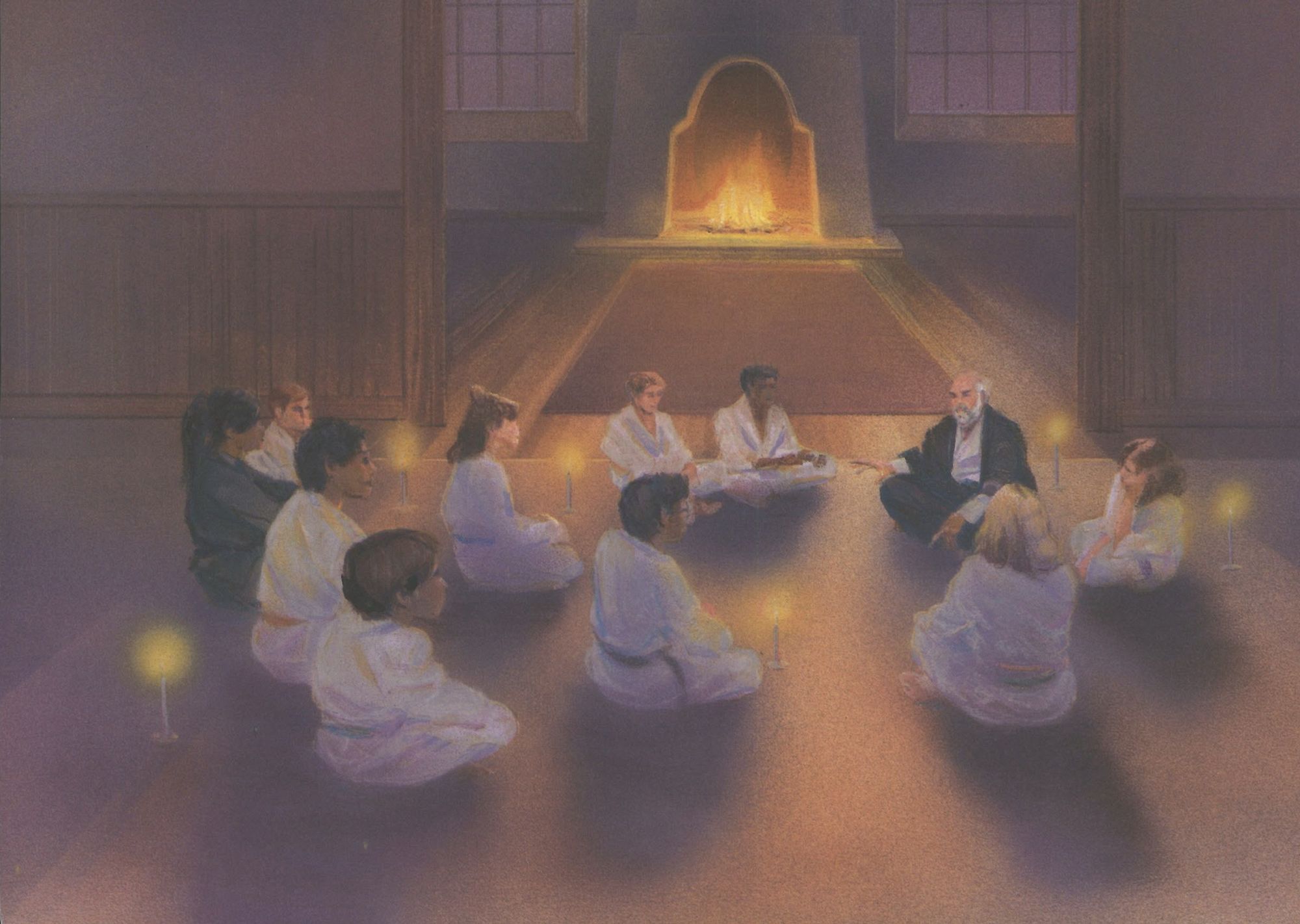 My name is Dr. Terrence Webster-Doyle. Like most people I am concerned about the violence in the world and being able to understand and prevent it. I have created this museum presentation to address this vitally important concern. I am also proposing that the Martial Arts can address it. But before we can begin to understand the root causes of human conflict and see if the Martial Arts can attend to this, we need to ask ourselves important questions. 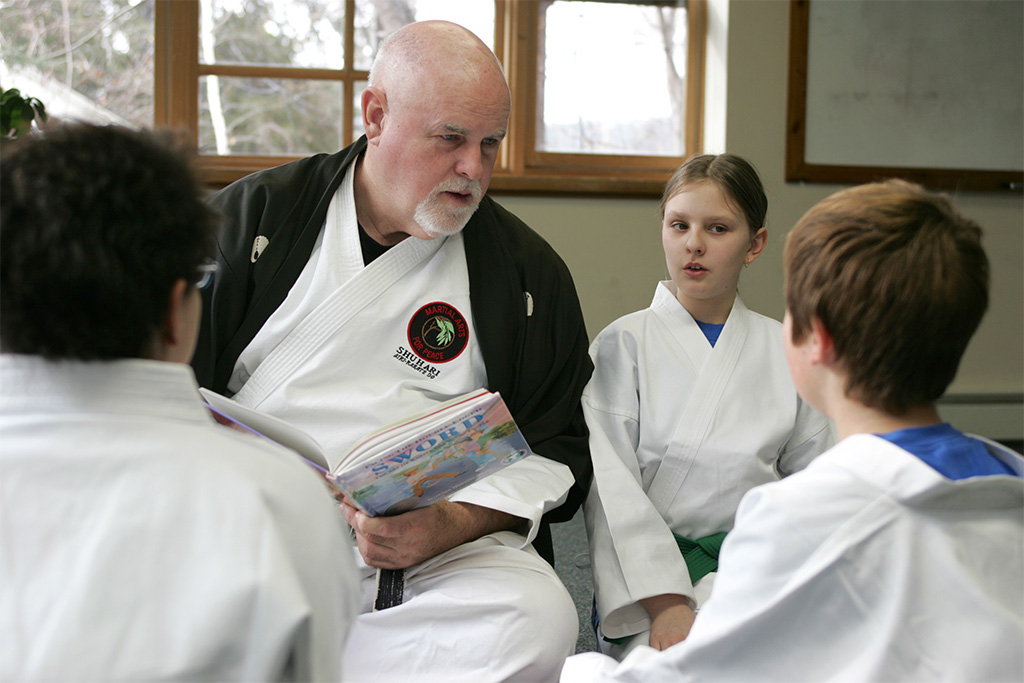 Most of us think of conflicts and war as something “out there” in the world – something apart from ourselves. In fact, war starts with you and me – with how we grow up, what we learn at home and in school, and how we deal with other people in our lives.

If you get angry with me for some reason, conflict is created, and we are at war. That’s how it begins – a feeling inside us. If we can learn how to handle that feeling, when we first feel it brewing inside us, we can stop it before it starts.

Today, we are still fighting over territory and beliefs, using weapons that can kill. Our ancient ancestors left us a chain of warlike footprints.

The fact is that the source of war is in us, in each and every moment, in the way we have been conditioned to think and act. 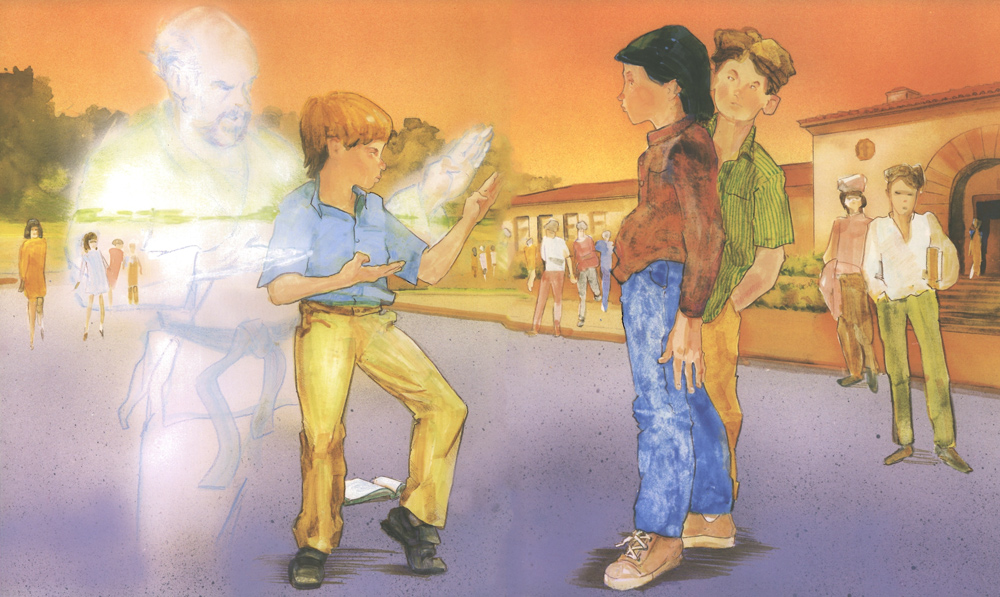 Respect is the act of intelligence that breaks the chains of the ancient warrior. Respect is learning how to stop a fight before it starts.

Our challenge as Martial Artists is to become a new kind of warrior – a Martial Artist for Peace. We can learn to break the bonds of fear, hate and violence. When we find the roots of war buried deeply in our old brain, we can end conflict.